Thanks for family, friends and a secure future

We don’t normally praise government programs and financial systems when we sit down to Thanksgiving dinner, but I thought it would be good to list the things about retirement security that deserve our praise, along with a side dish 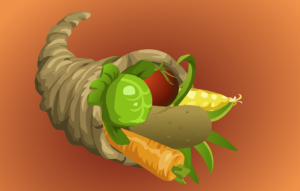 of what we can wish for in improvements.

In that spirit, here is a list of what we should all be thankful for this season (in addition to the bounty of our loving families).

We can give thanks for:

END_OF_DOCUMENT_TOKEN_TO_BE_REPLACED

Recently, I sat down to read Barron’s annual Top 100 Financial Advisors list, when a radio interview caught my attention. A Duke professor was discussing a study that suggested two interesting things: first, that the average US citizen has no clue about our country’s actual distribution of wealth; and second, that in a “blind taste test” Republicans and Democrats generally agreed about the optimal level of wealth distribution (it seems to be closest to – your attention please — Sweden’s.)

We hear so much about the vast political divide over this issue, but the Duke professor found virtually no difference between the views of rank-and-file Democrats and Republicans. Equally surprising, both parties tended to agree that changing the tax code should not be the main corrective measure to wealth distribution.

I added it up: (1) nonpartisan stats confirm that the wealth gap is growing; (2) Americans’ vision for the wealth gap is far more equitable than today’s reality; and (3) changing the tax code is low on our list of to-do’s for fixing the issue.

Now I opened Barron’s 100 Top Financial Advisors report – and found that one of our best investment publications sets the bar for the “top” in this way: “Our ranking is based on each advisor’s assets under management, revenue generated for his or her firm, and the quality of the practice.” That practice is buoyed by the quality of the investment advisory programs which likely have minimum levels of investment that average investors can’t reach. Conclusion: the rich get richer partly because they get better advice and better investment programs.

Consider the implications of this. A huge number of baby boomers are retiring in 20 years or less. Most aren’t prepared for it, so they actually need better advice than the wealthy — and right now. They still have time to build what I call a “personal retirement benefits package” that can generate a stream of spendable retirement income to augment payouts from Social Security, 401(k) or IRA, and any pension. But if they can’t afford good advisors and good programs, they won’t retire with that spendable income. The playing field will become even less level. The wealth gap will keep growing. And, according to the professor, most Americans don’t want that to happen.

My solution? We need a new breed of advisors to crash Barron’s Top 100 list by bringing the best advice and programs to average investors, utilizing up to date technology and delivery systems. By focusing first on filling the income rather than the wealth gap, we can at least start the process of leveling the playing field.
Jerry Golden
President
Golden Retirement, LLC
www.GoldenRetirement.com